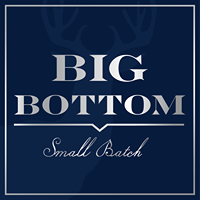 
Inspired by the craft spirit movement in Oregon, Ted Pappas opened the doors to Big Bottom Whiskey in 2010 as the premier independent bottler of whiskeys located in Hillsboro, Oregon.

In the initial years, the company primarily focused on merchant bottling of bourbons along with specialty finished bourbons such as the multiple awards winning Port Cask Finished Bourbon. In 2013, Big Bottom released its brother brand, Calhoun Bros. Adventure Spirits. Under that brand, the first whiskey pouch in the US market was introduced along with a traditional Aged Rum.

In 2015, Big Bottom Whiskey officially transitioned to Big Bottom Distilling, as they begin to release their own line of distilled products that include also gins.